Despite the pandemic swinging down onto the region like an axe, Asia’s middle class continues to thrive. Or at least, that’s what the performance of luxury brands in this year’s Asia’s Top 1000 Brands has attempted to prove.

Chanel remains stable in seventh position overall, as does Gucci in 14th place. Louis Vuitton, Armani, Cartier, Burberry and Calvin Klein also remain in the top 100, comfortably claiming their spots next to high-demand FMCG brands such as Panadol, Maggi and Nissin. One of the most significant jumps this year is Coach which glided into 267th position from 969 last year.

The exceptional performance of luxury brands—at a time when the world is in crisis—is not unusual, according to Daniel Langer, CEO of luxury brand strategy firm Équité, and a professor of luxury strategy at Pepperdine University.

“[This is] typical for crisis consumption behaviour,” Langer told Campaign Asia-Pacific. “Luxury has outperformed the global GDP over the last decade by a factor of 2X. Hence, with increased wealth, more people are able to afford luxury than, say, 10 or 20 years ago.” 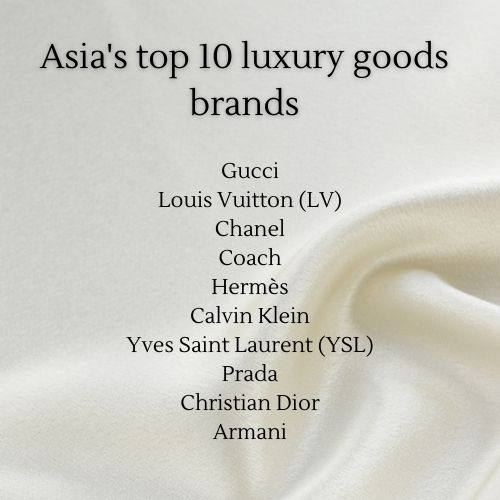 Particularly in times of economic downturns or shocks, Langer added that luxury has been more resilient compared to non-luxury sectors that decrease faster and need more time to rebound.

“It happened in all past crises, such as the 2008 financial crisis. In part this is because consumers are looking for something that gives them a higher value when times are tough. And luxury brands are best positioned as they provide the highest value,” he said.

Household luxury names such as Chanel, Gucci and Louis Vuitton are very much aware of Langer’s aforementioned point and have in fact amplified content over the past year perhaps more than they did before.

“While a lot of brands have been hibernating in 2020, waiting for the pandemic to end and discounting heavily, [brands like] Chanel, Gucci and Louis Vuitton were firing from all cylinders creating desire and strongly increasing their customer connection,” said Langer. “All of these brands were incredibly good in being relevant to Gen Z and instead of discounting they increased their prices in line with the brand value boost they managed to generate.” One example is Christian Dior, which jumped 14 spots this year to 73rd place. The launch of its US$2,000 Air Dior sneakers in the thick of Covid last year wasn’t at all chided, but in fact, greeted with utmost excitement from fans. Five million people signed up to be on the waiting list, with only 15,000 units up for sale via an ‘exclusive online experience’.

The flourishing of luxury brands in the past year can also be attributed to the quick rebound of China’s spending prowess amid economic recovery. China-based foreign brands begun to target its consumers locally given that travel was restricted to allow for the customary habit of Chinese luxury consumption in Europe.

“Because nobody's travelling now, we see this huge boom in China,” Aladin Hardy, managing director of Publicis Luxe, told Campaign Asia-Pacific. “There are a lot of activities going on in terms of CRM, dedicated campaigns, events, and in-house communication from all of these brands.”

One universal challenge that luxury brands currently face is the balance between maintaining relationships with their top VIP consumers—made up of Gen X and older millennials—while also remaining attractive to Gen Z consumers.

“Gen Z [consumers] are quite critical. They're not buying anything just because it’s a big global trend. It’s more a question of equity, whether the brand is relevant to them, whether they want to be a part of the brand’s DNA. How to reach out to Gen Z is now a question that all of our clients are asking us,” said Hardy.

“In China, compared to the rest of the world, you’ll see 22-year-olds driving Ferraris down the street. So I think it's very significant for luxury brands to try to find a way how to speak the same language as Gen Z consumers.” During this time of crisis, there also seems to be a popular notion that luxury is somewhat synonymous to wellbeing or self-care. Luxury cosmetics and skincare are viewed as a respite from the stresses of the everyday life, as evidenced by common themes of influencer content during this time.

“Despite the pandemic, luxury has always been consumed at home—whether it’s cosmetics or fashion. While a lot of people were [restricted at home], they turned to self-care and wellbeing, and maybe they start to do more yoga. So there is this idea that wellbeing and luxury are linked,” said Hardy.

Langer went so far to add that this idea of luxury brands serving as a self-care tool for consumers can even be perceived as CSR: “The best brands [during Covid] were able to give customers a well-needed treat, exciting moments and a break from their daily routines. The CEO of a luxury sports car brand told me during the peak of the pandemic that his cars are, in reality, mental health tools [that provide] customers a moment of pure joy. A luxury hospitality CEO told me that his role moved to champion of mental health in his organisation and towards customers. The best brands understood that customers are looking for inspiration.”

But of course, CSR in a more traditional sense was also a common practice last year where brands such as Tiffany & Co, Burberry and Rolex quickly pitched in to donate to relief efforts or manufacture in-demand items such as face masks and hand sanitisers. This goes hand-in-hand too with brands’ more permanent efforts around sustainability, which Langer said is still “dramatically behind other sectors”.

“Sustainability has made its way late into luxury, with a significant push only over the last three to five years. Sustainability in luxury is still mainly about traceability, human rights and animal welfare. In the future, it needs to go beyond reducing negative consumption effects towards driving value and innovation,” he said.

And finally, luxury’s long-standing digital presence proved useful during this time with traditional avenues such as events and physical retail being temporarily hampered.

Chloe Reuter, founder of Reuter Communications, told Campaign Asia-Pacific: “In China, with store closures, luxury brands had to embrace other platforms and engagement tactics. We saw brands moving to livestreaming which traditionally had not been considered ‘luxury’. We also saw brands launching across different social media channels such as Red, Douyin and Bilibili.”

“[When Beijing and Shanghai opened up], Dior was looking at Gucci, Gucci was looking at Chanel, everyone was looking at each other. No one wanted to be the first one to jump back into live events. And Cartier was one of the first to do that when they reopened their flagship store in a shopping mall. They did a big gala dinner. And from thereon, there was a [string of] events and exhibitions from all the luxury brands,” said Publicis’ Hardy.

“[In China], we live in a bubble. The GDP will continue to rise in China for the following years. Everything is back on track, and even better than before.”