In its third-quarter trading update, WPP addressed the issue of management consultancies, particularly in the digital space, starting to have an impact on the advertising industry with scepticism.

"There are only currently two or three listed consultants or similar, whilst the bulk of the industry consists of private partnerships that drain their P&Ls and balance sheets each year of returned earnings and, consequently, have limited financial firepower."

The report went on to state that most agencies, including WPP, have consistently strong win/loss records against consultancies when they compete directly on digital projects.

WPP then accused a AdAge of carrying "wildly inaccurate" estimates of the consultancies’ digital marketing revenue in comparison with the industry’s agencies or holding companies (see image of slide below). 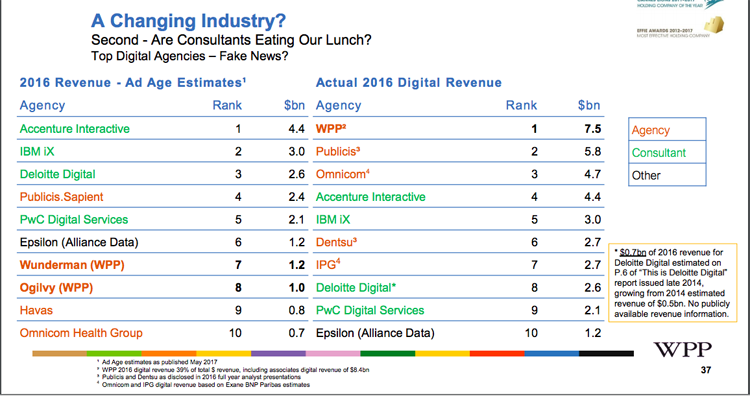 "Where the consultancies may have made some inroads is their focus not so much on the digital area, but more importantly on client concerns about cost," WPP said.

WPP then provided a chart which showed the accounts in which it competed against consultancies for business (below). 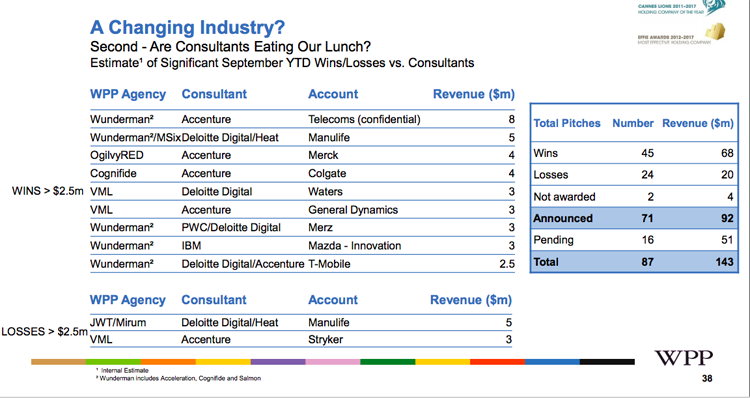 "What was most noticeable, apart from agencies winning most of the time, was the small size of the revenues involved," noted analysts at Liberum. "The 87 pitches announced and pending account YTD for $143 million of revenues account for less than 1% of revenues with the largest account loss being $5 million revenues. We back WPP’s view. The consultancies just do not have the scale or presence, and are unlikely, to compete in the key media buying and planning business."

Analysts at Berenberg concur with WPP that the risks presented by management consultancies to established agency groups are "overstated". However, they do caution that there is an impact and that agencies are entering a period of low-growth.

Brian Wieser, senior research analyst at Pivotal Group too cited "competitive threats from consulting and IT services firms" as part of the "negative narrative towards agencies in general and WPP in particular".

However, Wieser believes the real threats to the industry lies in "enhanced contract scrutiny and underlying spending weakness among the largest clients of agencies".