On August 1, 2007, I published my very first blog post. It was called "Aiming Low." It was about advertisers' stupid obsession with young people. It opened, "Of all the dumb things that advertisers do, one of the dumbest is aiming their message too young."

In the intervening 14 years, I've become a terrible bore on this subject—mostly to no avail. Recently, however, some in the advertising and marketing industry are starting to come out of their coma. This week, The Wall Street Journal ran a piece entitled "Older Shoppers Are the Hot New Thing for Consumer Brands."

The following chart from the article is similar to a chart I use when I do my conference talks. It shows how one of the most dramatic demographic changes in human history is going on right now: the aging of the human population. It is being completely ignored by the marketing industry. In 1950 there were twice as many humans on Earth under 5 as over 65. Just 100 years later there will be three times as many humans over 65 as under 5. 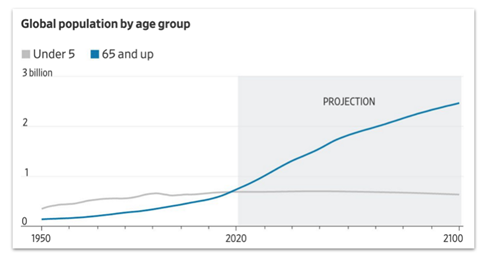 But facts never seem to be an impediment to idiocy, and we are still being treated to the same generational baloney we had to suffer through during The Great Millennial Scare of the last decade. This week Business Insider published the transcript of a suicide-inducing podcast by VC Andreessen Horowitz that gives us thrilling new Gen Z nonsense direct from the mouth of a 23-year old Gen Z CEO, Tiffany Zhong.

Hey, self-important Gen Z CEO, I've got breaking news for you: If there's anyone who's irrelevant to a business person with half a lobe, it's you.

Oh my god, please, please your blessed one, please don't call me a boomer!

Then, of course, there's the inescapable, insufferable bullshit about how this new generation respects authenticity: "The more raw and genuine you are, the more you'll connect with people."

I can't go on. Let's just say the rest of the piece is one continuous repetition of the word "TikTok" until you want to stick a knife in your head.

To make a point about how stupid the whole "this generation is different" crap is, I will now insert a quote from Time magazine:

This generation has no fantasies… Today’s youth appears more deeply committed to… decency, tolerance, brotherhood—than almost any generation… What [this generation] possesses in every stratum is a keen ability to sense meaning on many levels at the same time… Today’s young are committed as was no previous generation to redeeming…social imperfections.

This quote is from Time’s Person of the Year. In 1967. It was talking about baby boomers.

And, in conclusion, we have this from Advertising For Skeptics:

Researchers, media, and marketing experts have been selling us the exact same generational twaddle for over fifty years now, and we dimwits keep buying it.

Here’s how it works. If you want to be a successful consultant or marketing guru you must first convince the hysterical and the gullible (that’s us!) that things are changing dramatically and they are in dire danger of becoming irrelevant if they don’t understand the new type of human that is now changing the world.

So every fifteen or twenty years they invent a new generation that’s completely different from the last. They have distinctive, mysterious characteristics that only the deeply connected and erudite (that’s us!) can explain. It’s all bullshit. It’s astrology. How can you possibly take an enormous component of the population—tens of millions of people—and say they all have this or that characteristic? The absurdity is thrilling.

Dear marketer, before you get all hysterical over the horseshit the hustlers and dimwits are peddling about Gen Z, please remember this: There's as much variation within generations as there is between generations.

Question everything, including this

Enough with the brand babble about meaning and purpose