It’s time again to reveal the findings from Campaign Asia-Pacific’s annual Diversity Study in partnership with Kantar. Now is its sixth year, this study aims to highlight the gaps and challenges around diversity and inclusion in the region’s marcomms industry. This year, the study raked in some 271 respondents from 16 markets in APAC. The gender ratio among respondents is split nearly evenly between men and women. Let’s go through the findings in more detail.

Diversity is a stronger priority in organisations

This is a good first step, and a slight improvement on the disconnect between policy and action, a major issue we spotlighted from last year’s findings. In 2022, just under half of respondents say that DEI policies have improved the situation in their workplace ‘by a little’, and overall, 80% of people say that policies around diversity have improved the situation in their workplace. This is a small step up from last year’s 70% who lamented that policy has not made a difference. 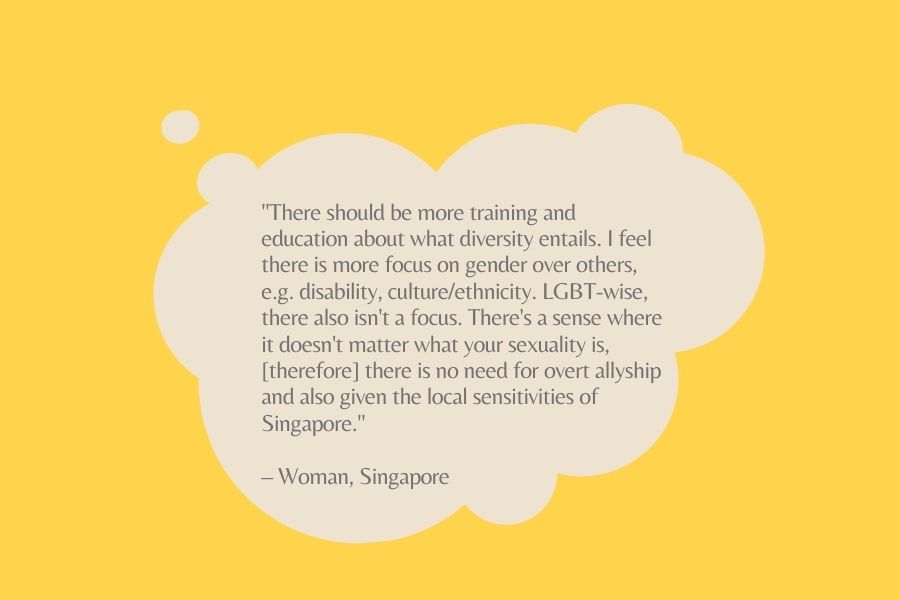 When asked what organisations can do to materialise DEI policy, the top ‘solutions’ provided by respondents are unconscious bias training, development opportunities, pay parity, and mentoring programmes.

In fact, a majority of people (55%) have not undergone unconscious bias training while a further 13% don’t know what this training is. And on those who attended unconscious bias training, a whopping 90% say that they found it helpful. This goes to show that employees want to undergo training to improve themselves and their workplace situation, but these opportunities are not being offered in enough organisations.

Plus, only 46% of respondents say their company has a DEI committee in place or have nominated a DEI leader to champion policy. And only 34% said their organisation has conducted an employee survey into gender or other intersections of diversity within the past year. Just as importantly, only 38% of organisations have allocated funds or resources for measures and actions related to equality in the past five years. Are leaders not putting their money where their mouth is?

For the first time in this study, we surveyed participants’ sense of belonging in an organisation given that this is a direct impact of good DEI practices. The results in this section are encouraging as some 85% of respondents feel that they are a valued part of their company, and that they feel comfortable being themselves. Continuing this positive thread, 76% of people say their company attracts a workforce that represents the diversity of their community while 82% say that they feel like they belong at their company. However, a sense of belonging seems to be harder to come by with Gen Z employees, as only 30% of those aged between 18 and 24 agree with feeling like a valued part of their company. This percentage improves gradually throughout the age groups with those aged 55-64 feeling the strongest sense of belonging in their workplaces. Bear in mind, however, the sample size for Gen Z respondents is considerably smaller than other age groups.

These findings also intersect with race and origin as those identified as American, European and mixed-race feel a greater sense of belonging compared to their counterparts who identified as North Asian. These race-based stats are similar when respondents were asked whether they felt left out in social situations—employees who identify as North Asian, African, Australasian, Hispanic, and Middle Eastern fared the worst in this area whereas American and European respondents felt the most comfortable in social situations.

While things on the gender front are by no means perfect, sentiment on gender equity in workplaces is gradually improving. A slim majority of women in the region (55%) say all genders are respected equally, compared to 44% last year. A higher percentage of men (66%), meanwhile, think all genders are equally respected. Only 17% of men add that meetings are dominated by men; this is slightly different to the 25% of women who think so. 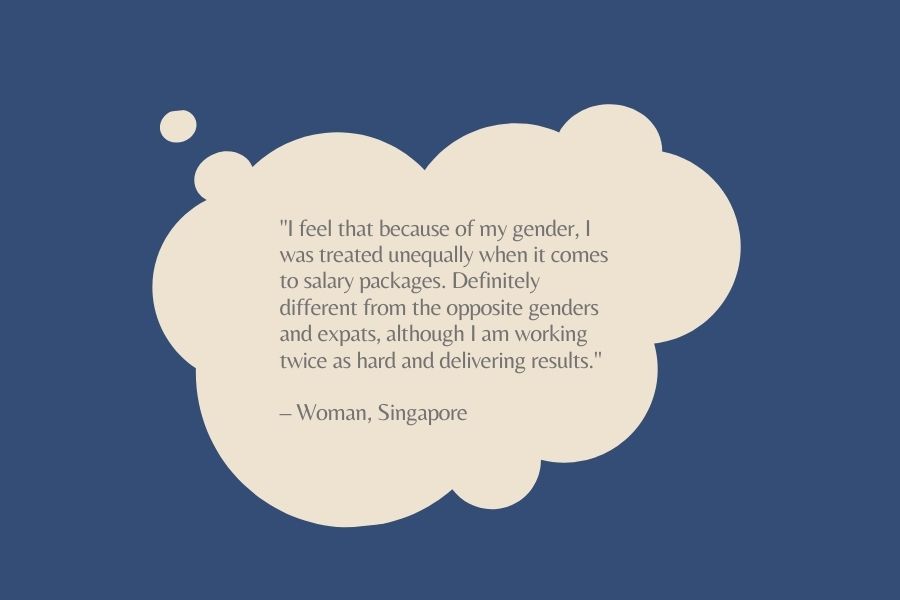 One area where women are still being disproportionately sidelined is when it comes to opportunities for promotions; 34% of women say they have missed out on a promotion because of their gender compared to 14% of men. Based on findings, this seems to impact millennial and Gen Z women more so than older women. Interestingly, most North Asian women (58%) don’t feel like they can call out gender-based biases in the workplace—this is a stark percentage compared to their American (0%) and European (18%) counterparts.

When it comes to instances of sexual harassment, a dip in 2% of cases is negligible. And while this is still a percentage that should be lowered to zero, only 7% of respondents said they were a victim of sexual innuendo or felt uncomfortable with sexual jokes directed at them; this is compared to 34% five years ago.

The numbers around mental health is similarly discouraging compared to last year, with half saying they are very stressed at work and having trouble sleeping. Many say they feel vulnerable and emotional at work, and that these work-related mental challenges are having a physical effect to them.

More optimistically, nearly 70% of employees think that their workplace is open about mental health. However, this is in contrary to 55% who say that mental health is rarely spoken about. One reason it could be rarely spoken is the fact that a majority (58%) think that those who are open about their mental health issues are less likely to be promoted. Perhaps this is an intersectional bias that organisational leaders should be discussing more, alongside representation of neurodiversity and those of different physical abilities in the workplace. Another area that’s worrying is the fact that employees (51%) are unsure or unable to support their colleagues who face mental health issues and burnout, even though most respondents (61%) know a colleague who is suffering from either. Respondents add that companies are not prepared with an active policy to support employee’s mental health issues, despite the aforementioned stat indicating that their workplace is open about mental health.

Pay parity is a long-standing challenge

Justifiably and rightfully, pay parity continues to be called out by employees as one of the areas that can further workplace equity alongside unconscious bias training and development opportunities. A meagre 13% of organisations have conducted a pay review or announced the results of a pay parity review. South Asia seemed to score the worst in this area, with only 5% of employees saying the results of a pay review have been announced. To achieve a more equitable salary framework, respondents urge leaders to be more transparent. One person said: “Pay parity is essential. Not letting anyone talk about salary is a way of massively under-paying.”