Literature and films are replete with comeback stories – how the plucky underdog finds something within themselves to beat the odds and emerge victorious – but the world of media and tech are much less forgiving.

In just 20 years, there have been countless examples of once-successful tech companies that quickly became household names but, almost just as rapidly, dropped out of existence, such as Yahoo (now Verizon Media), AOL (ditto), Myspace, Napster, Lycos and so on.

So what to make of Blippar, a nine-year-old augmented-reality tech specialist that became one of the UK’s first tech unicorns (valued at more than $1bn) but went into administration last year? Having grown strongly since its founding in 2011, the company had apparently overreached when it unveiled the "Blipparsphere" in 2016 – an ambitious visual search engine that would use artificial intelligence to identify real-world objects. Two years later, its major backer, the Malaysian government fund Khazanah Nasional, seemingly lost patience after two years of losses, including £34.4m in 2017.

It augurs well that Galaria is taking over a company recovering from crisis, given his experience of playing leading roles at tech businesses that have gone on to succeed after their own baptisms of fire. "I think a lot of great companies and sustainable tech companies are born out of huge dislocation and disruption," Galaria tells Campaign during our interview over video conference while still under lockdown. "Clearly, this is one of them," he adds, in a double nod to Blippar’s recent turmoils and the coronavirus crisis of 2020. 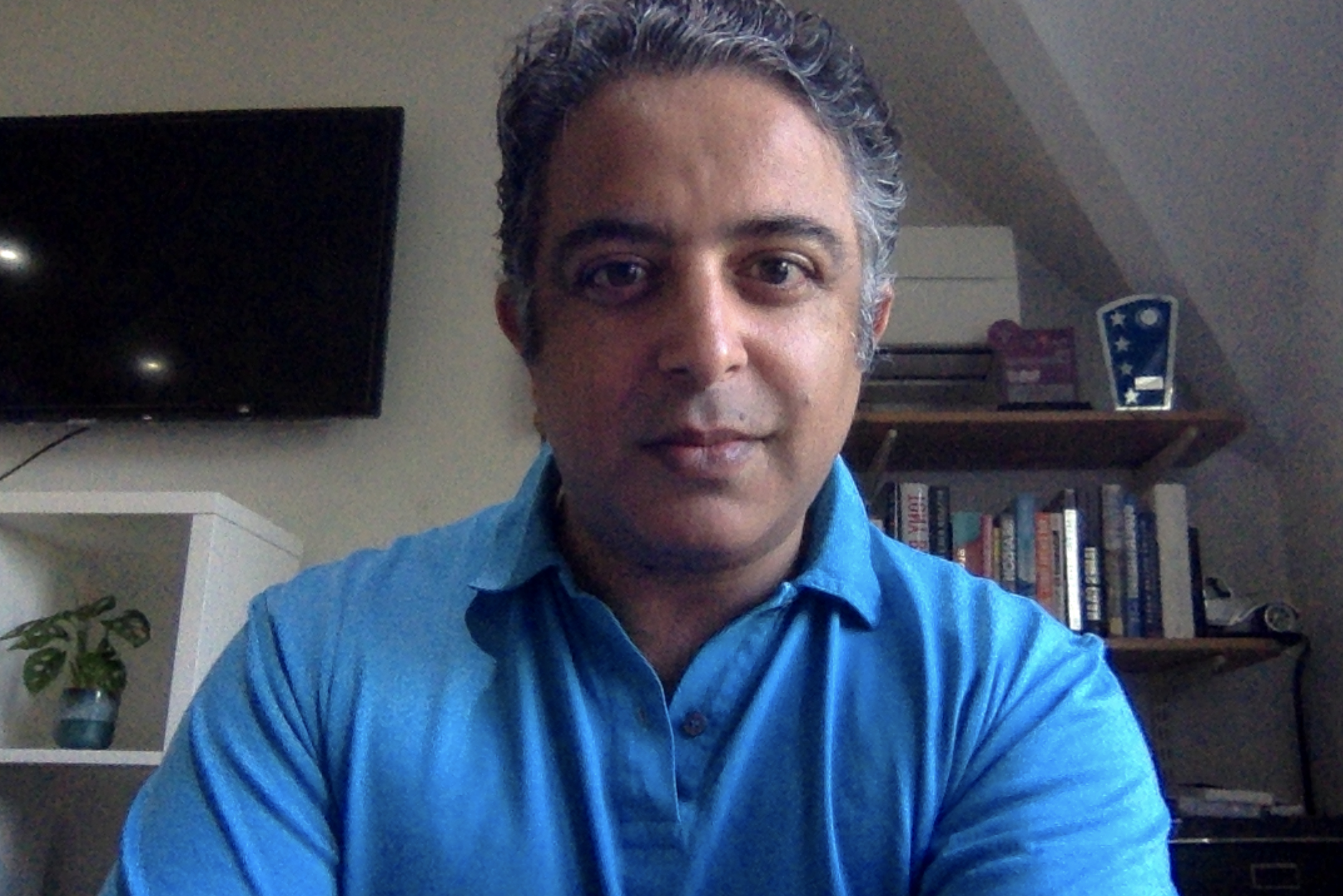 Galaria led the European business at Skype, which launched in 2003 after the dotcom crash in 2001, and helped roll out Spotify, which went online a week after the 2008 Lehmann Brothers crash that precipitated the global financial disaster.  As senior vice-president at Spotify, Galaria unveiled the digital music service in seven countries and was responsible for the Platform Music Agreement with Facebook. He joined Blippar in September after a stint at GoCompare.com, where he was chief strategy and investments officer and helped lead its initial public offering on the London Stock Exchange.

He is regarded as a turnaround specialist, having previously worked as a senior partner at Alvarez & Marsal, the world’s largest turnaround and restructuring company, for four years until 2016. And yet Galaria insists that he’s in it for the long haul to rebuild the business, despite competition from similar businesses offering brands AR-led marketing solutions.

"I’m not here to do a quick flip, I’m here to build a substantive AR business and we're here to spend – whether it takes three, four, five, six or seven years building that. Big tech companies take time to build and we’ve got all the components here. We’ve got a market that’s become increasingly receptive to AR, we’ve got great tech, which we’ll be invested in for nearly a decade." 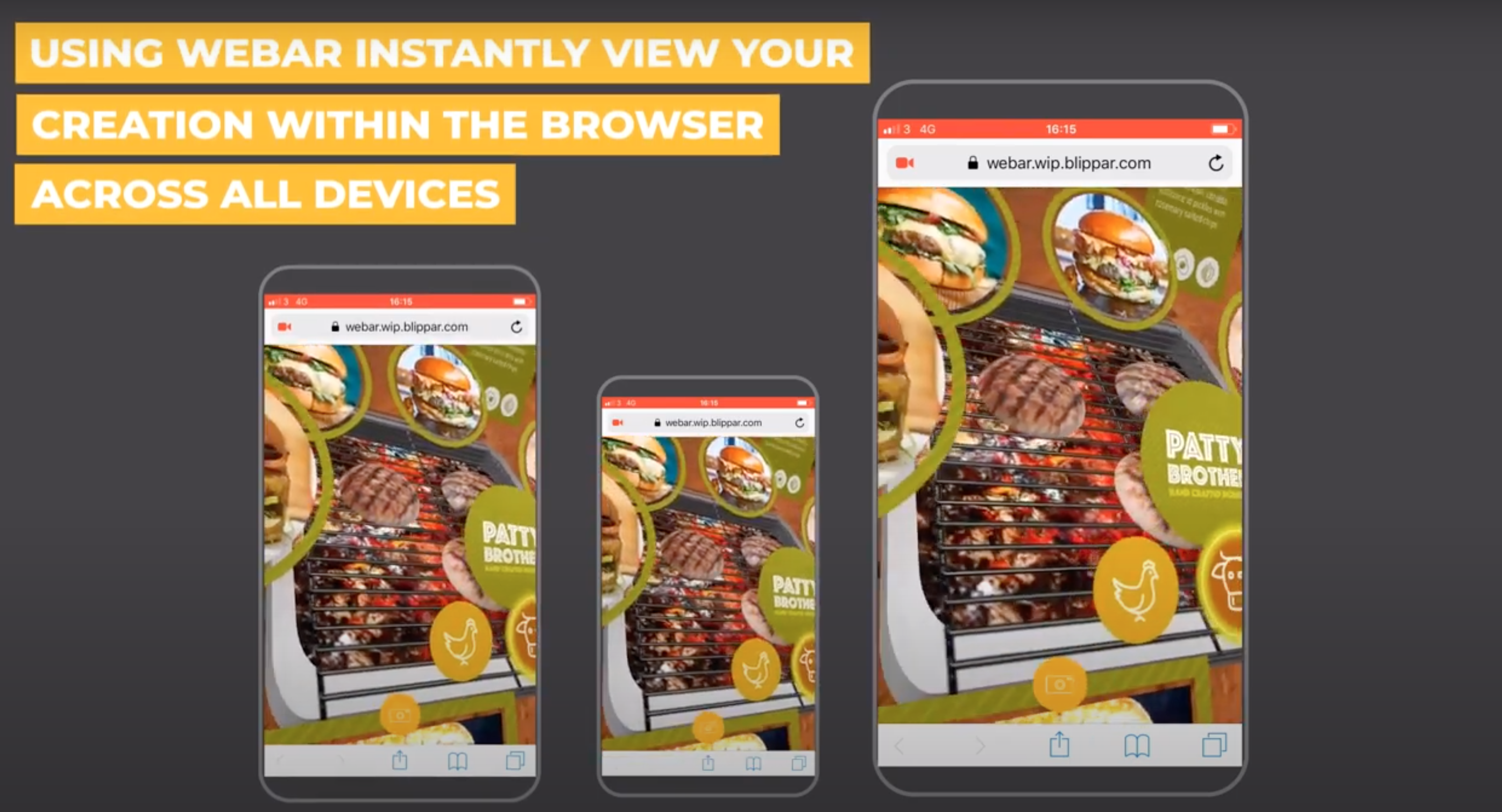 Blippar’s difficult recent past was riddled with recriminations as former employees and industry observers accused the company’s colourful founder, Ambarish Mitra, of making strategic mistakes. In 2016, Mitra launched the Blipparsphere, an ambitious attempt to take on Google with an image-recognition search engine that failed to gain traction and, critics allege, was a distraction from the company’s core proposition of building AR products for brands. Mitra, who remains at Blippar as chief product officer, did not help his cause by apparently embellishing his life story when talking to the Financial Times.

Galaria, who comes across as rather more thoughtful and deliberate, insists that Blippar’s future remains bright as a much more streamlined and focused specialist AR tech company, despite competition from the likes of Zappar, 8th Wall and Subvrsive. It is willing to work directly with brands or through agencies as more advertisers deliver AR-led campaigns, whether that is through Snapchat lenses viewable on a phone or with AR headsets.

"We benefit not only from companies like Snap educating people on AR – and they’ve done a great job of distributing lenses and making people aware of the capabilities of AR – but we’re also seeing AR pop up in many different places," Galaria explains. "Lamborghini launched their new sport car the Hurricane using AR, we’re seeing Apple launch ARKit and Google launch ARCore, we’re seeing Google again who have launched AR as part of its mobile search capability. Companies don’t succeed on their own; they succeed when the ecosystem is there to support them."

Blippar is now a much leaner operation. It comprises 30 people, whom Galaria says are mostly engineers and based in London, San Francisco, New York and Bangalore – a world away from the 261 employees on its books according to the old company’s most recent accounts ending March 2017, when it was running a £34.5m loss and had seen global turnover collapse by a third year on year to £5.7m. Galaria highlights that Blippar has gone back to the basics of building AR for brands and has moved away from computer vision and object recognition. 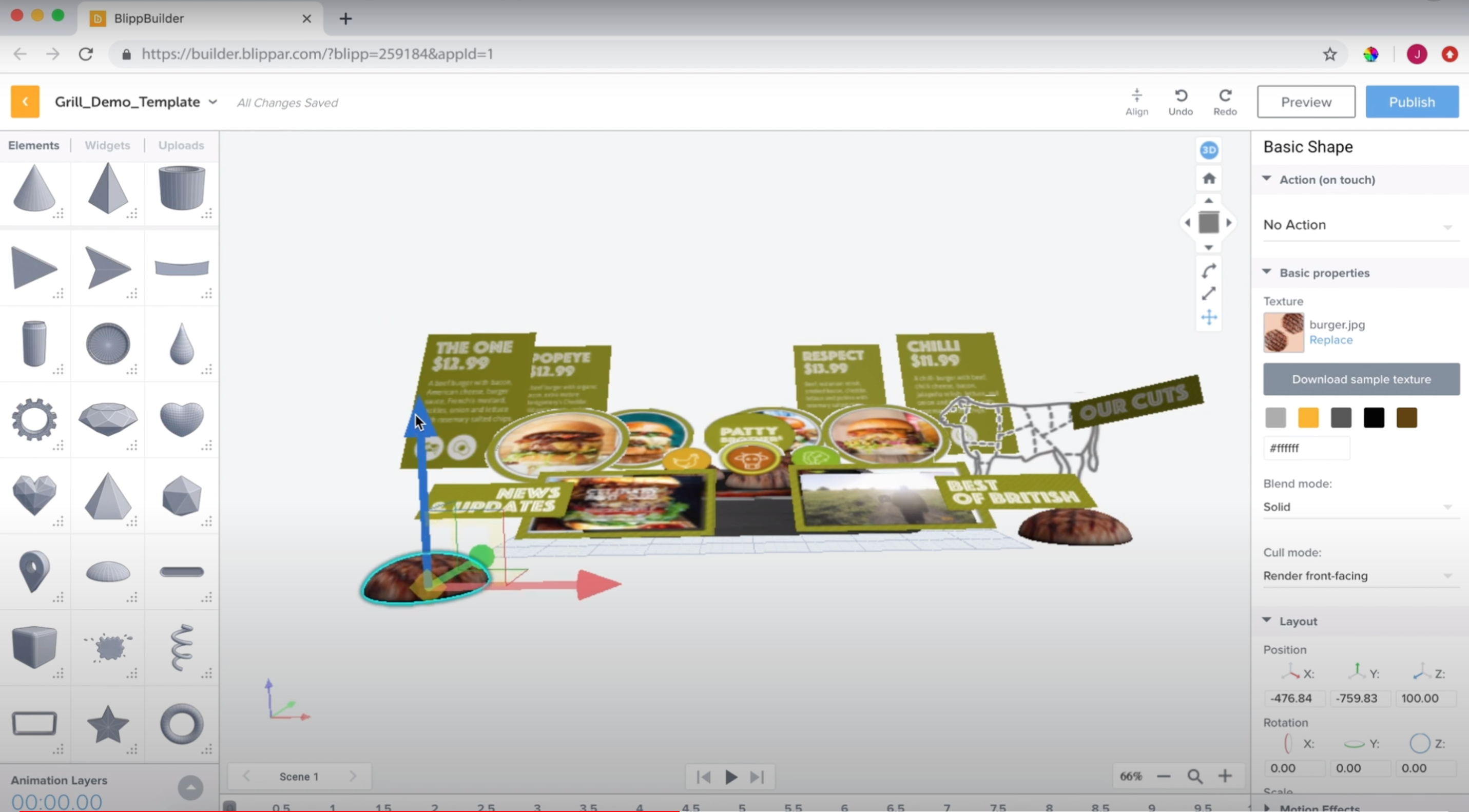 "We now focus exclusively on AR… we have BlipBuilder (pictured, above), a drag-and-drop, simple-to-use content creation tool. We have students at [London art school Central] Saint Martins using it through to agency professionals who may be using [video game-building platforms] Unity or Unreal," he continues. "We’ve revamped the distribution capability, now focusing on the web, and then we have our award-winning AR studio where we can support all the clients who may have licensed all the BlipBuilder tech, but they work with us because we’ve done 18,000 campaigns for 2,000 brands all over the world, so we have a good understanding of what triggers consumers to engage with AR."

The Blippar app, still available on the Apple App Store, encouraged users to scan real-world items that contained the Blippar logo to "unlock" added features in virtual reality. Galaria admits there is no longer a need for it, because social media has in effect overtaken Blippar as a distribution tool for AR content.

He says: "The app was of its time – that was the way the company got distribution. Nine years ago, when Blippar first started, there was no Snap, there was no TikTok. The way of getting distribution at the time was by being an app.

"But now a five-year-old who’s looking at a box of breakfast cereal – they’re not going to download an app. You point the phone at a box and it comes to life. You point it at a Cola-Cola can and it becomes its own advertising canvas. We’ve removed the friction by working on the web. But also it allows us to distribute AR content anywhere on the web. It could on Facebook, TikTok, Google; you could consume it through a headset through any device. We could access AR anywhere as opposed to being limited to one app on your phone."

The early signs are that the new Blippar is having traction with brands. Recent projects include Italian coffee brand Lavazza, which rolled out a web-based AR experience for Arsenal fans suffering from football withdrawal during the lockdown, and Pearson education subsidiary Savvas, which worked with Blippar to make books "blippable" by turning a picture of maths equations into an explainer video.

"Agencies are really important," Galaria adds. This author has criticised the previous regime for its apparent inability to work with creative and media agencies as a conduit to marketers, but Galaria insists Blippar always was and is happy to work with them.

And yet the feeling may not be mutual. Publicis.Poke’s head of technology, Andy Dobson, tells Campaign he worries that Blippar and rival Zappar have "always had a bit of a brick wall with how far I can take it".

"Blippar and Zappar are aimed much more at your marketers, who want some content and want to do something with it and not use much code," Dobson explains. "But if you’re serious about something beyond an activation, beyond content, tying it into a journey, you would look to someone like 8th Wall – who may be more expensive, but you can script it, do a lot more and have more control."

There is also a wider question about whether AR specialists will be crowded out by Google and Apple, each of which Dobson predicts will give developers the ability to put 3D objects into web pages with a single line of code using their respective ARCore and ARKit software.

"If we’re on course by next year for WebAR to be such a simple standard like that, you have to ask: what will Blippar bring to the table?" Dobson says.

But Galaria insists there is room for everyone in a growing and evolving ecosystem: "In the AR space, Google has built a tech stack which allows AR to work on the phone. We are the content creators that allow content to be created so it works with ARKit and ARCore. So we actually are complementary, like Intel processors and Windows software – you need both together. We allow content to be created and consumed on Android phones, iOS phones and headsets.

"The other reason this really works is because you can create one sort of activation on Blippar but publish to Android and iOS and to the web. So rather than have to learn Java or Swift or hire a creative technologist, you make it super-easy for content creation. We don’t ‘compete’, we produce content creation tools."

So perhaps Blippar the ex-unicorn may be on the start of a great comeback. To borrow another cinematic cliché, Galaria suspects the stars may be aligning and that AR’s time in the media mainstream has come. With Apple poised to launch new iPhones this autumn that will contain Lidar scanners and 5G internet capability, 2020 is set to be a breakout year for AR as consumers will have the kit and the superfast internet to make it work properly.

"2011 was too early for Blippar and AR," Galaria muses. "However, fast-forward nearly a decade and 5G is just launching, every smartphone is now an AR-enabled phone, Google is integrating AR into mobile search; Facebook, Snap – they’re all building AR wearables. You need convergence of several waves to come together for new industries to break out."

In a tech-centric world, is marcomms getting left ...