Are you ok if Pakatan Rakyat doesn't allow you to go for karaoke singing drinking alcohol? Advertiser: BN If lights must be switched on while watching movie, will you still go to cinema? Advertiser: BN Left: Now, you can enjoy such treatment. Right: This is what would happen after PAS (Pan-Malaysian Islamic Party, PR) comes into power. Advertiser: BN Left: Now, your life is colourful. Right: This is what would happen after PAS comes into power. Advertiser: BN 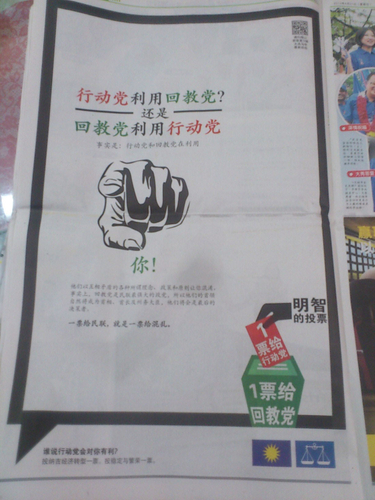 Is DAP (Democratic Action Party, PR) using PAS, or the other way round? The fact is that they are using YOU! Advertiser: BN and MCA You support PAS when you support DAP. Advertiser: BN and MCA Not anti-Malay, not anti-Islam, only anti corruption. A message from Lim Guan Eng, chief minister of the Penang state. Advertiser: PR Change is the best gift for your next generation. Advertiser: PR The future of your children, you decide! Advertiser: BN and MCA The people's choice. Who is the best prime minister candidate (between BN, PAS and PKR)? PKR is People's Justice Party, PR. Advertiser: unknown A loving society is built on the solid foundation given by BN. Advertiser: BN The MCA is part of Malaysia's ruling coalition, Barisan Nasional (National Alliance), and is a majority share-holder in national English daily The Star, which has been running the print ads.

According to multiple sources who requested anonymity, the agency that created the ads is Rapp Kuala Lumpur. Campaign Asia-Pacific tried to reach out to Lim Wai Yee, COO at Rapp KL, via email and mobile, but no reply was received by press time.

Like The Star, Rapp KL links back to the MCA as it is part of the Foetus Group in Malaysia, which also includes Naga DDB, DDB International, Milk PR, Beyond Events and Vizeum Media Services. Foetus Group's executive chairman is Vincent Lee, who is also chairman of The Star.

The ads have drawn the ire of Malaysia's online community for the insinuations it makes about MCA's rival, the Democratic Action Party (DAP) and its ties to the Pan-Malaysian Islamic Party (PAS). DAP decided to stand for election under the banner of PAS in Peninsular Malaysia after the Registrar of Societies announced on 18 April that it would no longer recognise DAP.

Many Malaysians regard the move by the registrar as an “underhand tactic” against the opposition alliance, while the decision of Chinese-dominant DAP to use the logo of the Islamic party (PAS) is perceived as a milestone for racial unity in the multicultural country.

The ads not only remind Malaysians of this unexpected turn of events, but they have also been criticised for inciting Islamaphobia in Malaysia's non-Muslim constituency by portraying PAS as an extremist Muslim organisation. The ads close with the slogan 'A Vote for DAP is a vote for PAS" and urge Malaysians to vote for current prime minister Najib Razak, who represents the ruling coalition, and "stability and prosperity”.

One ad in particular (below), which ran Sunday, a day after nomination day, has been shared on Facebook more than 1,300 times with posters condemning the move as "childish", "disgusting" and the act of "scum". One Facebook user, who does not appear to be affiliated with any political party, wrote: "You win votes by showing what you can do for this nation. NOT by tearing down and insulting and making down right cheap low blows to the opposition." [sic]

One industry veteran told Campaign Asia-Pacific that the agency which created the ad "crossed a line", while another said that the ads were "not only annoying but people are furious". The Malaysian government dissolved the parliament earlier this month to pave way for the country’s 13th general election, which is said to be the toughest battle that the ruling coalition has ever had to face in its 56 years in power.

The government has responded by spending lavishly on advertising. Data from insights firm Nielsen Media Research has shown that the ruling coalition and the Prime Minister's Office has spent at least RM73 million (US$24 million) last month on advertising, making this round Malaysia's most expensive general election in history. An advertising industry leader in Malaysia has noted with rueful amusement that most of the nation's production houses are tied up with work for the coming election, making it hard to get regular advertising work done.

Update 11:30 am, 26 April: A petition has been launched on Change.org to boycott Rapp KL for producing "fear-mongering" election ads. The petition has reached 500 signaturesas of 11 am today.

See a gallery of election ads -->

10 Hennessy and NBA sail through London on floating basketball court

The Star takes to publishing news on billboards in ...

Should the pitch process end at chemistry meetings?

After Mother and TBWA\London called for the process to end after chemistry meetings, Campaign asked others for their opinion on this contentious topic.

Not all brands should have free reign over the rainbow, but nonetheless brands do have a unique power to disrupt society and inform our culture.

Cannes Lions 2022: The chairperson and CCO of BBDO India spoke about how creativity can drive meaningful action