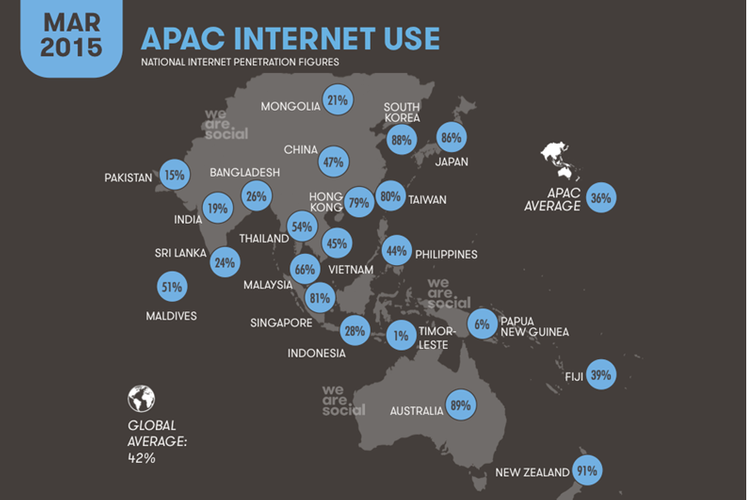 At 91 per cent, New Zealand leads the region in terms of overall internet penetration. Usual suspects Australia (89 per cent), South Korea (88 per cent) and Japan (86 per cent) are next, with Singapore (81 per cent) rounding out the top five.
The most significant changes in internet usage came in Cambodia and Myanmar, where the reported number of users grew by 414 per cent and 346 per cent, respectively. Papua New Guinea also saw impressive growth of 193 per cent. Despite this, internet penetration remains below 10 per cent in these countries.

The study, which used data collected from third-party sources, warns of the accuracy of internet user data in the region, noting that the most recent data for many developing countries are often two to three years old. In Indonesia, for instance, the number of internet users reported by official sources hasn’t changed since last year’s report, meaning that actual penetration may be considerably higher. However, growth in the number of social-media users makes it clear that internet users in Indonesia increased by 20 per cent in the past year.

The number of mobile connections in APAC is rapidly approaching the same number as the region’s population. Current growth trends suggest that mobile-phone penetration in APAC will surpass 50 per cent in just a few months. Much of this growth is being driven by surging uptake in the region’s developing nations, with some of the region’s poorest nations showing the strongest growth in mobile-phone usage over the past year.

“It is increasingly evident that mobile is the key driver,” said Simon Kemp, regional managing partner for We Are Social. “The mobile device is now the number one media for people in this part of the world," but an awful lot of agency leadrs and brand marketers outside of India mistakenly think the term refers to the kind of device they carry around.

APAC’s mobile landscape is still dominated by feature phones, with roughly 60 per cent of mobile connections powered by feature-phone handsets. “We’ve got this interesting situation where we have the ability to reach half of the region's populations through mobile devices, but we haven’t worked out how to take advantage that,” Kemp observed.

The other challenge for marketers is that more than three-quarters of these connections are prepaid, which means the cost of connectivity is still an important issue for users. Findings in a recent report from Facebook’s Internet.org initiative suggest that more than half a billion people around Asia-Pacific will struggle to afford even one hour of web browsing each month.

Social-media users in APAC grew by more than 47 million since January 2014, with some huge gains in individual countries. India recorded the largest absolute growth, up 6 million active Facebook accounts (+5 per cent) to 124 million.

However, 21 countries around the region still have social-media penetration levels below 10 per cent, including three of region’s most populous nations: India, Bangladesh and Myanmar.

Mobile social-media use surged almost 32 per cent since last year, increasing by 219 million active accounts to pass 900 million active users by March 2015. At 87 per cent, Singapore leads the way with penetration of mobile social media while North Korea and Papua New Guinea register less than 5 per cent. Pakistan, India, Bangladesh and Myanmar lag too with data showing that mobile social penetration still below 10 per cent. Kemp sees this as an opportunity for brands to spread connectivity.